Interest Rates On The Rise 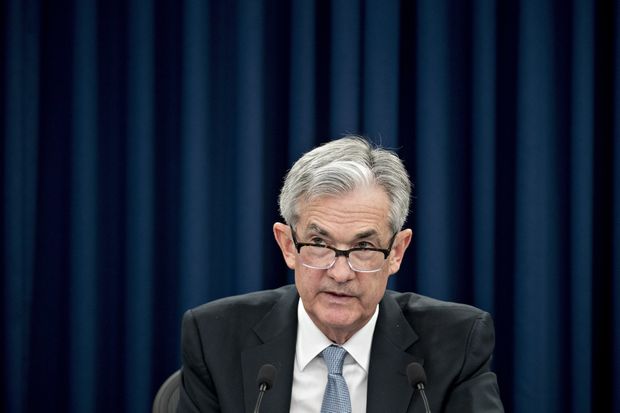 WASHINGTON—The Federal Reserve said it would raise short-term interest rates a quarter-percentage point and signaled it could lift them at a slightly more aggressive pace in coming years to keep the strengthening economy on an even keel.

Fed officials said they would increase their benchmark federal-funds rate to a range between 1.5% and 1.75% and penciled in a total of three rate increases for this year.

But compared with December, more officials think they will need to raise interest rates at least four times this year if the economy performs in line with their expectations. Some seven of 15 participants now expect at least four rate increases this year, an increase from four of 16 participants at the December meeting.

Most Fed officials also expect the Fed would need to raise rates at least another three times next year. At the December meeting, officials projected around two increases would be needed in 2019.

“The economic outlook has strengthened in recent months,” the Fed’s rate-setting committee said in its postmeeting statement. 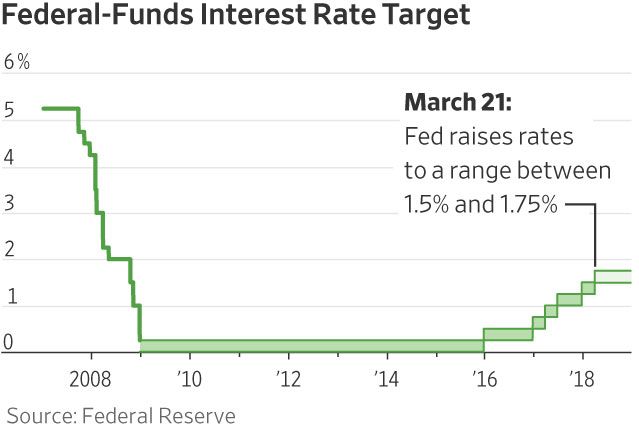 The vote to raise interest rates at the meeting, the first led by Fed Chairman Jerome Powell, was unanimous, with all eight participants in favor of the rate increase.

The rate increase approved Wednesday was widely expected. Traders in futures markets already anticipated the Fed would raise rates a total of three times this year, and before the two-day meeting ended Wednesday, investors placed a roughly 40% probability on at least four interest-rate increases this year, according to CME Group .

Officials marked up slightly the estimate of interest rates they expect to prevail over the long run, to a range between 2.75% and 3%. Because they now expect a slightly more aggressive path of rate increases in the coming years, this means more officials now anticipate they will need to tap harder on the brakes to cool down the economy after next year.

Officials release their economic projections every quarter. The new figures released Wednesday show they now expect inflation to rise above their 2% target next year and in 2020. Inflation has remained below that target for most of the last six years.

After a surprising deceleration last year that defied the Fed’s forecasts, inflation in recent months has firmed. Consumer prices rose 1.7% in January from a year earlier, according to the central bank’s preferred inflation gauge. So-called core prices, which exclude volatile food and energy categories, rose 1.5%.

An open question for Mr. Powell is how the Fed would respond to inflation if it rises above the 2% target. Officials have said their target is symmetric, meaning they are as willing to tolerate periods of inflation slightly below the target as they are periods when it rises slightly above the target.

But because inflation has run below the Fed’s target since officials formally adopted it in 2012, markets don’t have a good read on how policy makers would chart interest-rate policy when inflation is above target.

Officials also raised their estimates of economic growth this year and next, likely reflecting an increase in federal spending Congress approved last month. Officials in December revised their growth projections higher because Congress was nearing completion of a bill to cut taxes by $1.5 trillion over a decade.

Because officials see the economy growing significantly faster than the level they expect will prevail over the long run, the forecasts imply officials see rising pressure on the economy’s productive resources, which could complicate their rate decisions.

The big question heading into their two-day meeting was how much Fed officials expected to lift rates in coming years, particularly after lawmakers approved a more generous federal funding bill in addition to cuts in corporate and individual tax rates at the end of last year.

In February, Congress approved a $300 billion spending bill that could add around 0.4 percentage point to gross domestic product this year and next, on top of last year’s tax cuts that could add a similar boost to output over the same period.

Wall Street economists expect the measures will push unemployment down to the low 3% range next year. U.S. joblessness hasn’t been at that level since the Korean War, and no one is quite sure what that could do to inflation or financial stability.

That would leave unemployment well below the level they see prevailing over the long run. They marked down that forecast a touch, to 4.5% from 4.6% in December. The revision indicates officials believe there might be a little more labor slack than previously estimated.

Since officials last met at the end of January, glimmers of rising wages jolted financial markets, illustrating how investors’ anticipation of stronger price pressures and a shift in the Fed’s rate path might usher in more volatility in stock markets.

Mr. Powell, in recent congressional testimony, indicated he had turned more bullish on the economy since the start of the year.

“We’ve seen continuing strength in the labor market. We’ve seen some data that will, in my case, add some confidence to my view that inflation is moving up to target,” he said. “We’ve also seen continued strength around the globe, and we’ve seen fiscal policy become more stimulative.”

Write to Nick Timiraos at nick.timiraos@wsj.com