As the oldest city in the state of Georgia, Savannah has a long and colorful history chock-full of interesting characters and beautiful locales. From manicured parks and horse-drawn carriages to ornate antebellum architecture, it’s no wonder Savannah is one of the most visited cities in the South. So to help make your upcoming trip to Savannah just that much better, we’ve compiled a list of the top fun facts about this intriguing city on the river.

Founded in 1733 by General James Edward Oglethorpe, a British philanthropist and Member of Parliament, Savannah was organized into grids and has been dubbed “America’s First Planned City.”

The picture of antebellum hospitality, Savannah is nicknamed the “Hostess City of the South.”

Over the years, many notable residents have called Savannah home including composer Johnny Mercer, inventor Eli Whitney and Juliette Gordon Low, who founded Girl Scouts of the USA.

Designated by the U.S. government in 1966, the city is one of the largest National Historic Landmark Districts in the country.

Forsyth Park, a large city park that occupies 30 acres in the historic district, is home to the Garden of Fragrance. Originally built in the late 1950s, the garden features fragrant plants and flowers surrounded by wells and an ornamental iron fence.

Founded in 1839, the Georgia Historical Society, located on Whitaker Street, is the oldest continuously operated historical society in the South.

Savannah is home to more than 100 distinct neighborhoods in six principal areas of the city including Downtown, Midtown, Southside, Eastside, Westside and West Chatham.

Located in the historic district, the Telfair Museum of Art was the first public art museum in the southern United States. It was founded in 1883 through the bequest of prominent local philanthropist Mary Telfair.

Since the early 1700s, City Market has been the commercial and social center of historic Savannah. Today, the market boasts art galleries, street musicians, a wide array of eateries and coffee shops and dozens of boutiques.

Founded in the late 1970s, Savannah College of Art and Design (better known as SCAD) offers more degree programs and specializations than any other art and design university.

The Mercer-Williams House, the former home of Jim Williams, is the main location of the 1997 film Midnight in the Garden of Good and Evil, which was directed by Clint Eastwood and starred Kevin Spacey and John Cusack.

Savannah’s Colonial Park Cemetery, located on Abercorn Street, was opened around the mid-1700s and serves as the final resting place for many of the city’s earliest citizens including Confederate soldiers and African-American slaves.

The Pirate’s House, a restaurant situated a block from the Savannah River on East Broad Street, first opened all the way back in 1753.

Some of the architecture you’ll see in Savannah’s Historic District includes Federal, Victorian Regency, Greek and Gothic Revival and Italianate.

Built in 1867 by the Freedmen’s Bureau, Beach Institute was established as a school for newly freed slaves. Today, it serves as an African-American Cultural Center featuring artwork and other exhibits.

Savannah is located at the mouth of the Savannah River and remained an important port city for the cotton and lumber industries for many years.

Parts of the 1994 movie Forrest Gump were filmed around the city including the famous bench scene where Tom Hanks’ character talks about how “life was like a box of chocolates.”

The Irish were among Savannah’s first settlers, which is why the city hosts one of the largest St. Patrick’s Day parades in the country.

Savannah was home to the sailing competitions during the 1996 Summer Olympics held in Atlanta.

The Flannery O’Connor Childhood Home, located on East Charlton Street, is a museum dedicated to the work and life of the acclaimed novelist who lived in the house from her birth in 1925 until 1938.

Dedicated to the city in December of 1983, the Celtic Cross in Emmet Park is made of Irish limestone from the County of Roscommon in West Ireland.

Ships of the Sea Maritime Museum, founded in 1966 and located within the William Scarbrough House, features ship models, paintings and maritime antiques from the 18th and 19th centuries.

The first and only Prohibition themed museum in the country opened in Savannah in May 2017: the American Prohibition Museum. It’s no dry establishment either, with a password you also get access to the speakeasy. 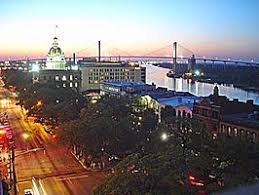